Now that you've understood the theory, let's have a little game. Play as often as you like and see how high you can score!

Always bear in mind that, if you’re going to fly thermals with a paraglider, this practical and theoretical knowledge might save your life one day! Once you have grasped the principle, it's not too hard to understand why, in an asymmetric collapse, the brake on the inflated wing tip will stall earlier than in ordinary flight: only half of the wing area is generating lift > more sink > angle of attack is already larger (inflow "further down") > result: logically less tolerance on the brake line. You should also be aware that our 2-dimensional diagram can of course only show one side of the wing. In real life, active and reactive flight means putting this to use on both sides – with your stronger as well as your weaker arm (unless you’re planning to avoid thermals entirely). So, if you're right-handed, try swapping your mouse over to the left after you finish and doing the whole thing again :-)

Before You Go: A Word On Groundhandling

We're not going to let you go without a word or two on the subject of groundhandling – because groundhandling is the best way to practice exactly what we're just explained, without even leaving the safety of the ground.

You may well have found that when groundhandling on a flat field, you will get quite a few frontal collapses to begin with. The culprit, again, is the angle of attack. The main difference to the situation during flight is the air flow parallel to ground. 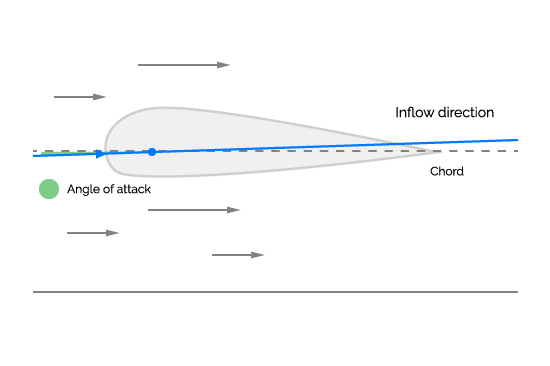 When the inflow to the wing runs parallel to the ground, the angle of attack is already smaller than it will be when you're airborne. This explains why a collapse will occur much more frequently during groundhandling. You may find that annoying – but you might also see it as a challenge, because the things you learn on the ground are valuable lessons for flight. And if you can learn not to get any collapses on the flats, you certainly won't get any in the air!

In any case, it's not a good idea to avoid the whole problem by groundhandling on a slope – at least not until you are much more advanced. While it's true that this would make matters much easier by giving you a normal angle of attack and thus reducing the number of collapses, you would constantly be in danger of accidentally taking off. If the wind is gusty and you're not particularly experienced at groundhandling, we strongly advise you not to try this!

To wrap up, here's a bit of logical motivation: if you're very good at groundhandling, you cannot possibly be bad at thermalling!